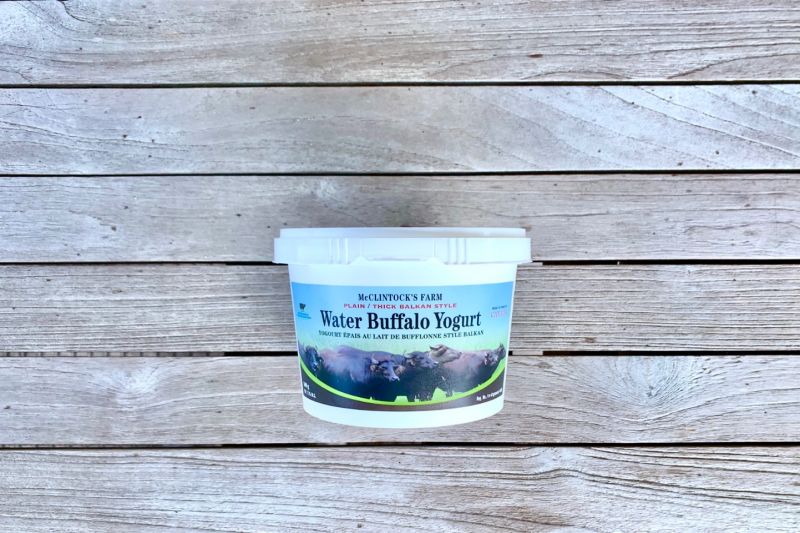 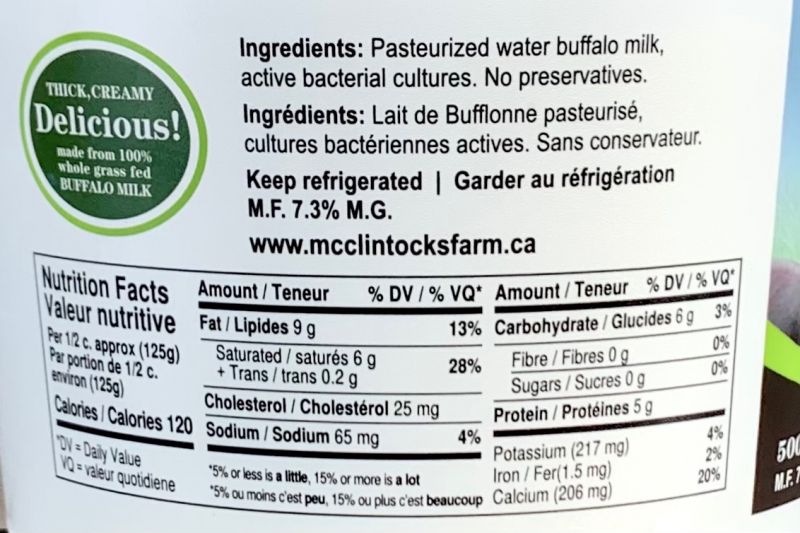 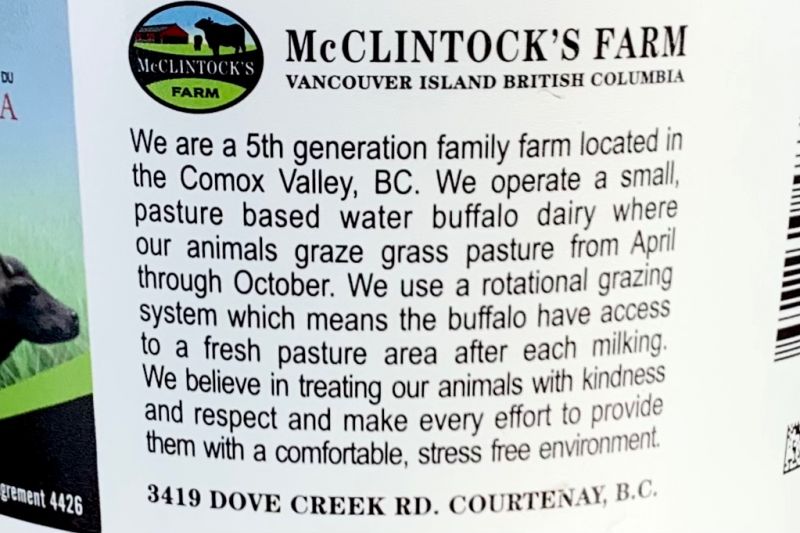 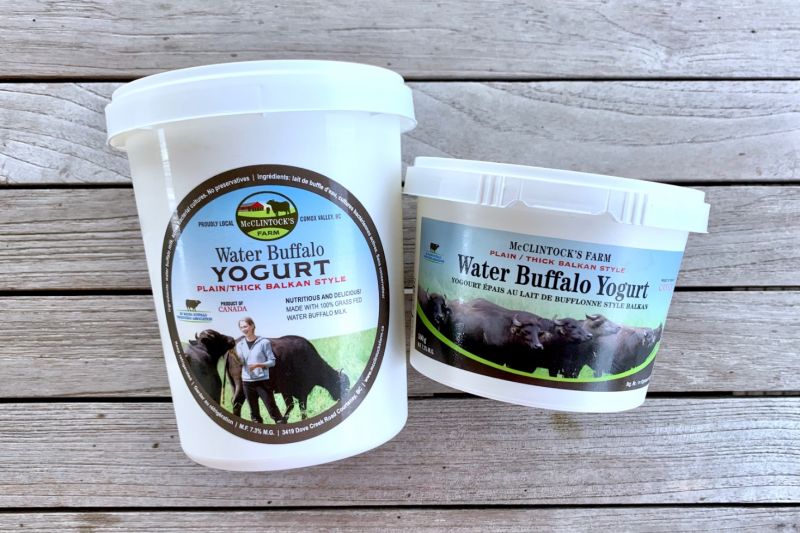 "Our award winning yogurt is made in a traditional, small batch kettle using 100% grass fed water buffalo milk and culture. The yogurt is then placed in the container and left to incubate for 5 hours in the Balkan style.  Buffalo milk is very different from cow’s milk as it is naturally homogenized, higher in calcium and protein, and lower in cholesterol.  The fat molecules are much smaller making it easier to digest.  The protein is different as well making it suitable for many people who have intolerances to traditional cows' milk yogurt. The yogurt is naturally thick without any thickeners, cream, or skim milk powder added and has a mild, smooth, great taste."
-Gerry McClintock 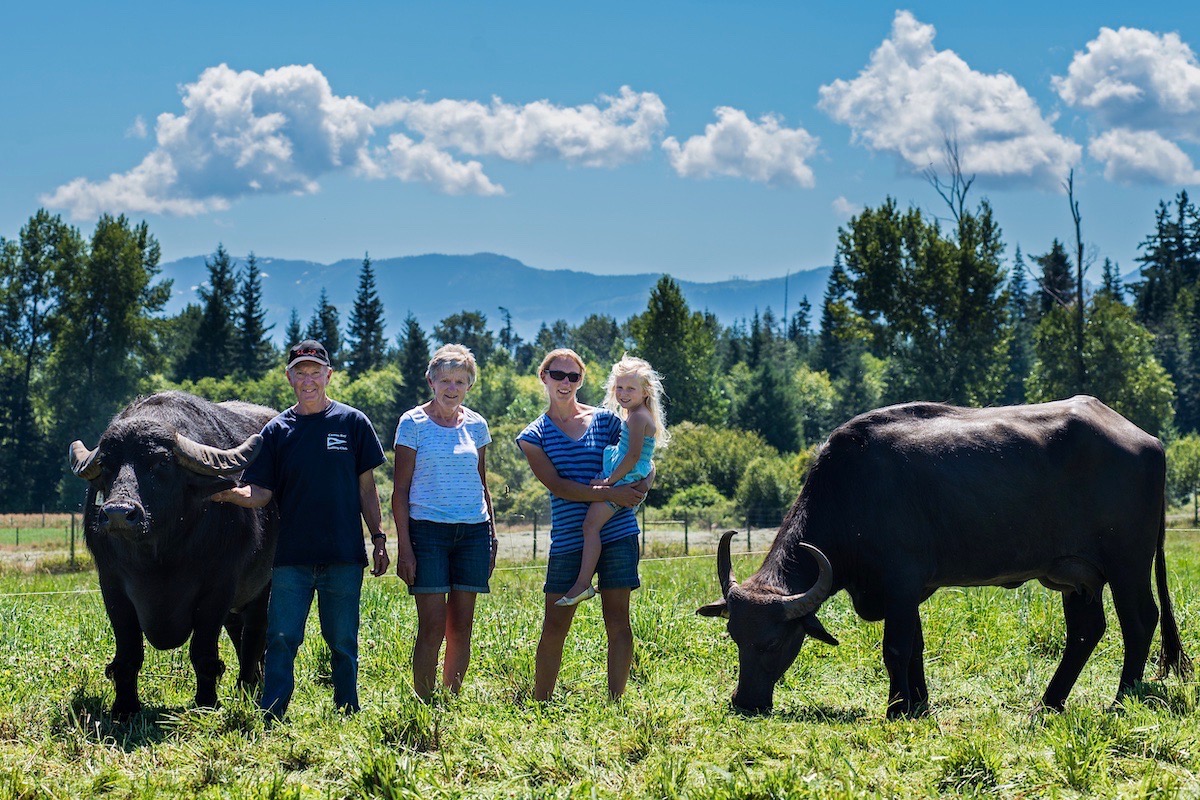 McClintock’s Farm was established in 1988 with the purchase of 23 acres in Dove Creek. Within the first few years we bought four cows and calves, put in some blueberry plants and learned a lot about farming – often the hard way! In 1996, we made the decision to become more than hobby farmers and purchased Val’s family’s 25 acres on Headquarters Road which has been in the family since 1876 and is a designated century farm. This makes us the fourth and fifth generations to farm this land.

Water buffalo became an important part of our farm after we purchased 15 young females from Fairburn Farm in Duncan, BC and a male from the Ontario Water Buffalo Company in Stirling, ON in December of 2010. We designed and built a barn which was completed in the fall of 2011 and retro-fitted an older building to become our milking parlour. The milking parlour was completed the night of March 7th, 2012 and our first buffalo baby was born the morning of March 8th, 2012 and we started milking!

In the past 7 years, our herd has expanded to a total of about 125 water buffalo and we have learned a lot! We strongly believe that our animals deserve to be cared for with kindness and respect and we strive to provide a healthy, natural, stress free environment for them. During the spring and summer months, roughly from April through until October, the water buffalo are on grass pasture. We bring them in to be milked twice a day, but the rest of the time, they are free to graze in the fields. During the winter months, the water buffalo are housed in a loose, sawdust pack barn. We group them in small, social groupings as they form strong bonds with their herd mates and mixing unfamiliar animals is very stressful. They prefer to sleep huddled together, often with their heads resting on each others backs. By using a sawdust pack barn, they are able to rest comfortably and lie down together.

We are a 100% grass fed dairy. Grass fed means that our buffalo are out grazing in the fields from about April until the grass stops growing in the fall. In the winter months, when they cannot be outside, they are fed grass silage. We do not feed any grains and all of our feed is non GMO. This reflects the natural diet of a water buffalo. All of the feed is either grown on our farm or purchased from local farmers.

One dozen large free-range eggs from Lockwood Farms in Cobble Hill, BC with a focus on environmental sustainability and animal welfare.

These hens eat grubs! Housed in open barns with 24/7 access to food and water, and access to outdoors (weather permitting).